Blog For those who follow...documenting your programs

Some time ago I ran across the open source application Wikidpad [1] - a kind of structured notepad, only more. Wikidpad gives you a place to store all sorts of information in a wiki-like structure that doesn't require any web server. There are lots of little things for which I could use something list this, but until recently none of these were a good enough reason to load Yet Another Application.

I had been looking for somewhere to keep a list of DVD's (the spreadsheet works, but won’t export as anything nice) and found a discussion about Wikidpad. Some link chasing later, I can see a really interesting application which ticks lots of boxes for me:

What it didn't do was sort out my DVD problem. Although you certainly can have structures like forms and lists in Wikidpad, they weren't quite what I was after. I was left with a solution in search of a problem.

Having finally migrated my website to Joomla and started this blog, I needed somewhere to keep all my notes about potential and half-finished blog entries. For me, Wikidpad was the answer.

I can have blog entries in various stages of development, from a set of chaotic one-line notes, through partial drafts and up to almost ready to publish pages that I only need copy and paste into the Joomla editor and tweak a few things (Ok, it's not quite that easy, but it's pretty close).

Because Wikidpad naturally arranges pages in a tree structure I can have separate sections for different subject areas and move completed pages to a different parent node when they are ready. Searching and HTML export are built-in, as is an import/export mechanism in case you need to move sections of your content between wiki files.

This is enough to make Wikidpad a compelling application, but having installed it, why not use it for other things...

Having made the decision to use Wikidpad, I might as well make the most of it. If you think of Wikidpad as a personal information manager, there are some semi-structured list and bits of information that don't really fit anywhere else.

I use a desktop 'sticky-note' application [4] for small reminders - current projects and due dates - and bits of detail that I need but that don't fit neatly in any project-specific directory structures. Some of these notes get quite large and really aren't sticky-note things.

I've now moved most of these to Wikidpad pages (under a separate tree with 'todo' tags). My desktop is neater and I can write as much as I need to, where I need to. My remaining sticky-notes seem more comfortable serving the purpose that (to me) they seem best suited.

For some of my clients I need the keep details about remote access methods (no, this doesn't include passwords) and some special procedural requirements. This sort of detail belongs in a CRM system, but I don't need that level of complexity. A 'Client details' node with child pages for the clients concerned lets me see all these details together - and I know I won’t accidentally archive the project directory that happens to have the crucial access details... 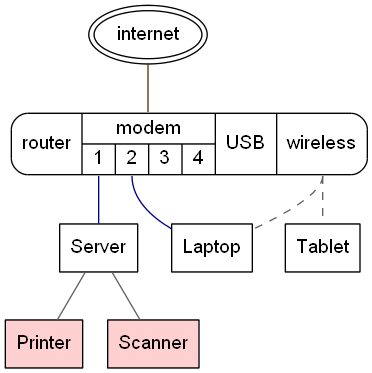 Normal people don't document their home networks. I do, using the Graphviz plugin, Wikipad can generate a useful diagram of network connections - like this:

This isn't my actual network, but you get the idea. Because the diagram is generated from text, it's much easier to maintain.

I don't use Notepad++ [5] as a temporary note store any more, although it's still my preferred plain-text editor for programming and web development.

What about the DVDs

I ended up writing my own program - sad, but true.