Blog Computers aren't intelligent, despite what you see in the movies

Motivation in the workplace is an on-going challenge for managers and employees alike. From my experience there is a widespread belief that people are only motivated by:

While these factors are real, history and research suggests that they are not enough.

In his best-selling book 'Drive: The surprising truth about what motivates us' [1], author Dan Pink has described the differences between the (hopefully) motivational techniques of businesses and (actual) behavioural outcomes of people. If you can't find the book, there is an animated summary of some of the main points from the RSA Animate video series [2].

Giving your employees some control and a worthwhile vision is your best bet.

As a motivator, money matters up to the point where it's no longer an issue. If I'm worried about paying the bills I may not have the capacity or willingness to take risks or innovate. Once I have enough, more wont improve my performance - the is not the same as saying that I wont be happier, only that the research shows I wont be better (and of course 'enough' varies between individuals)

What does work is giving people: 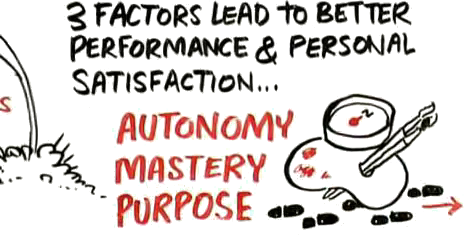 Read the book, or at least watch the video for the full story.

What to do about it

In practice, what can you do? Here are some suggestions.

[2] Drive: The surprising truth about what motivates us video from Royal Society for the encouragement of Arts, Manufactures and Commerce.